Khosla made history when he delivered the keynote address for the National Day of Silence at the University of San Diego, a Roman-Catholic affiliated Institution. Khosla shared how his journey through so many stations taught him what it means to honor the Commandment of True Tolerance: “the willingness to witness and accept another for who they truly are, rather than to seek to make them into a reflection of ourselves.” Khosla’s message was well-received by students and faculty alike and was one of his most rewarding lectures to date:

“To have the opportunity to speak of my journey in purely personal and spiritual — as opposed to political — terms was profoundly rewarding. Without this foundation, no true change is possible.” dhillon k.

GRIP (GENDER RELATION IN PROGRESS) MAGAZINE interviewed Khosla for its cover feature article. The issue features an in-depth conversation between Khosla and publisher Maureen Geddes, as well as a separate interview with journalist Erica Pearlman.

“We’re truly excited to have someone of Dhillon’s immense character and talent keynote the Gender Identity Conference,” stated Eden Lane, the Colorado Gold Rush event chairwoman. “Dhillon Khosla is truly an inspiration of what it means to be true to yourself despite insurmountable odds.”

“I am honored to have been selected to address the Gender Identity Conference,” said Khosla. “The mission and values of the Gender Identity Center and its conference mirror my own personal beliefs of accepting others for who they are, including both gender identity and expression. On a personal note, I feel most comfortable under such a broad and inclusive label.”

Khosla was featured on the cover issue of OutFront Colorado magazine. The issue contains an interview with journalist Matt Kailey.

In a rare event combining both music and lecture, Khosla appeared at Stanford University for an evening of both word and song.

“We’re thrilled that Dhillon Khosla will be bringing his many talents and inspirational message to the students and faculty of Stanford University and to the Bay Area community,” stated George Morris, Event Coordinator: “Dhillon’s story is so moving and I believe that everyone in attendance will leave the auditorium a changed person.”

Khosla issued this statement: “I am honored to be a part of this event at Stanford University – not just because Stanford has a reputation for supporting cutting-edge thinking on a broad spectrum of issues, but because the invitation issued by George Morris was so open-ended and gracious that it left me free to fashion this presentation in a way that reflects the full depth and truth of this journey.” 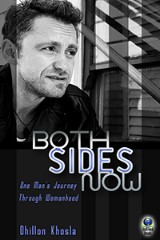